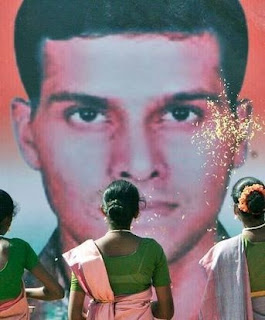 Today, two years have passed post 26/11 and we are where we were two years back. It is painful and it is frustrating that the biggest terror attacks did not teach us anything. Our chief minister forgot that the national anthem was playing and  that he was supposed to stand till it got over.
Two years back after the massacre ended; Vilasrao Deshmukh had gone to visit the Taj officially along with star son Riteish and director Ram Gopal Varma. This had cost him his post but Prithviraj Chavan has already replaced Adarsh Scam fame Ashok Chavan.
So, with whom will the Congress replace Prithviraj Chavan? They are suffering from the lack of clean men, therefore, are in a big fix.  Two years back was not accepting the hand of their pet Cobras namely: 1) the ISI and 2) LeT  in this gruesome massacre despite of repeated pleas from our country; Two years later they have still not accepted it.

Two years back there was no security in the public places, two years later the situation has not changed for better. Two years back Ajmal Kasab, the man who killed innocent civilians and three brave cops by committing a cowardly act was alive; he is still alive and safe in the prison. The only thing that changed after 26/11/2008 was that the blaze of anger extinguished into silence once again. Silence; which a man who goes to work everyday maintains because silence doesn't need time. Time, is something that nobody in this country has; especially those living in the urban part. Those having the power are well-versed with it and so they see no reason to take action.
Even though we claim to be united, we are still fragmented. Biases exist in class, creed, community, caste, designations, religions and generations. Therefore, it is easy for the politically correct politicians to divide us without causing an evident rift. Today, I wait in silence and painful grief to think that one day a new sunrise will bring the sunshine of security, happiness and health to my ailing motherland. At that time, her pain will heal and she will smile for once and forever!