March 31, 2011
Yesterday, was a historic moment for the two countries. Pakistani PM meeting India's Prime Minister Manmohan Singh over the India-Pakistan Semi-Final in Mohali. After a visible attempt of trying to re-establish friendship between the two countries. The much awaited match began with Captain MS Dhoni's decision of batting first. Virendra Sehwag gave an aggressive start to the match by piling 4s giving space to the master blaster to settle. But this aggressive streak came to an end with Wahab Riaz's ball when he had to go back to the pavilion with 38 runs. 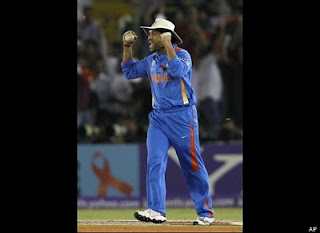 However, the master continued to play in a steady and stable manner despite of repeated false appeals by the green gang. Six times the master blaster was declared not out. Sachin tendulkar proved once again that bowling him is not a "child's play". He paved the way to India's victory by quickly pushing the score above 100. The master's innings came to an end at 85 with Shahid Afridi's catch at Saeed Ajmal's ball. But the little master was declared man of the match as Pakistani batsmen stumbled over their heads while chasing a score of 261.
During the Pakistani innings, Sachin Tendulkar was paying keen attention on every segment right from bowling to fielding. He was also seen guiding captain MS Dhoni.
Now, India will be meeting Sri Lanka in the Final at Wankhade Stadium, Mumbai. The nation hopes to see a century from the little master along with the world cup trophy.