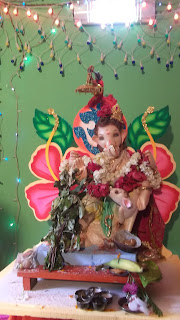 This is a new series that I have decided to start on my blog. Well, it deals with the zodiac signs of the Gods. Hinduism allows me to verify and analyze if our gods belong to a particular zodiac sign or not. Therefore, as a learned person and astrologer I would take advantage of this flexibility. Just as everything first starts from lord Ganesha, this series will start from him as well. Today, Ganesh festival is in full swing. Actually, it is bappa visarjan day for us. However, I had to pen down this experience. Some-days ago I read in a Newspaper that you must not ask bappa about marriage or love partner. Bappa is passive in these cases. As per my own experience, I tend to agree with the news article.  I asked bappa about the boy I like and he said through tarot readings that this guy is not good for me.

I probed to know why and the answer that I got was that he is very active (yes!!) and will tend towards infidelity. I do agree with Bappa in these matters. On the other hand, he gave clear indications to my sister that her choice was approved. They were shockingly real indications to shatter our skeptical minds. So, why is that for the first time my sister's choice got approved and mine got rejected?

A few years ago my elder cousin sister faced a bitter break-off. This happened a year after she left the family Ganesh festival to wash utensils and floors at her to-be husband's house who was hosting the same.  She said that it happened because our family bappa felt angry with her. I would put it this way that he didn't like her prioritizing the shallow so-called love affair over a family function. Bappa likes to be a part of a family, larger the better and he enjoys his stay as member of the family.

However, he certainly wants family members to observe veganism and celibacy during his stay. So, this certainly makes him an "Aquarius".  Hindus celebrate Ganpati bappa's birthday in early February. This is when the sun is in Aquarius. The people of this zodiac sign are known as atheists, scientific in nature. 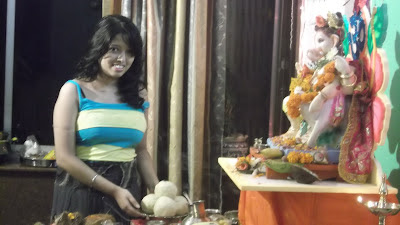 They have knack of gathering knowledge and have never prioritize love-making above other tasks. An aquarius man is never hungry or starved for physical cravings. In fact, at a certain point and in most cases they find it repulsive and shallow. Aquarians look down at those who are crazy behind such pleasures and those who give in to adultery.  If you look at the Lord Ganesha, you will find him loaded with all these qualities. He is a god who is known for having scientific brain, command over languages and varied subjects. He manages vast regiments of the army with wit and intelligence. He is sharp and innovative.

The most important thing is that he appreciates anyone who seeks knowledge and wisdom. But he nags when you ask to make love and marriage to be your ultimate goal.

Now, coming to the question why did he select my sister's crush and not mine?

Aquarians are safe or gentlemen in the real sense. They can restrain themselves and you can go anywhere safely with an Aquarius. Among the few men whom Pisces women trust, this zodiac sign tops the pyramid.  I am a Pisces but my love is a Scorpio. The eight sign of the zodiac, the sign of pleasures and eroticism. Although the Scorpio love-making is emotional it leans towards excess. There is no limit to a smitten Scorpio and this is something Aquarians detest. They prefer the more romantic but restrained Libras who know where to draw a line.

Libras will behave in the utmost gentle and sophisticated manner when the occasion demands.  Their behavior will never cross the line of control. Imagine a household Ganpati festival where a Scorpio man will crave for lovemaking 24/7; especially if he is paired with a Pisces or a Taurus.  This certainly won't go well with the Aquarius God who finds it to be shallow to divulge in such pleasures all the time. He would prefer a Libra who would concentrate on the festival and piousness of the occasion.  My sister's crush is a Libra and so he got approved.

But today bappa approved my love as well maybe as a farewell gift. His, Pisces father, Lord Shiva usually comes in my dreams and presses me to approve him (my scorp). Well, it is all about astrology you know!!