What a Scorpio Man wants in a Woman 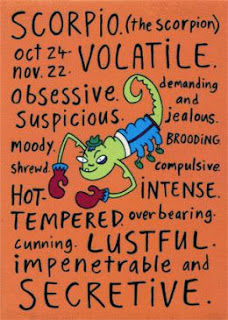 Bonnie and Clyde. Sid and Nancy. Brangelina. The Scorpio man is looking for an iconic relationship, a hall of fame soulmate story—and he refuses to settle for less. He may give his body, even his name or DNA. But until he finds his mythic other half, the person who makes him look and feel like a god, he’ll never give his soul. The Scorpio man needs to be part of a power couple. He needs a trophy wife and a soulmate in one. Here’s his idea of nirvana: he’s the king of his empire, and you’re the queen of yours, and together, you’re the envy of the world. It’s rumored that Scorpio P. Diddy will never get over Jennifer Lopez—even the model who mothered his children can’t keep him faithful. Although he’s a classic family man, Scorpio isn’t overly traditional about marriage. In many ways, he’s a feminist here.

He loves a powerful woman with her own life, money, career and interests—and he won’t try to change you once you get married. He doesn’t mind if you keep your own last name, or even out-earn him, as long as you keep your salaries private. He’ll gladly pick the kids up from school, make dinner and scrub the bathroom with a toothbrush if it means he can be left alone to pursue his passions. When it comes to his home and family, the Scorpio man demands creative control. Protective and possessive, he’ll set up a utopian family structure under his tight supervision, even home schooling his kids. He wants everything he does to be the “ultimate”—and molds his family according to his uncompromising vision. Scorpio rules the reproductive system, making him a natural father.

He longs for a close-knit family filled with love and open communication, and he’ll do what it takes to get that. Behind every Scorpio man’s relationship style is…his mom. He has a complicated, love/hate relationship with his mother that can border on Oedipal. Cutting the cord isn’t easy for him, and his resulting behavior pattern can be tricky to navigate. He fears that every woman wants to “engulf” him, yet he constantly creates situations where he needs to be mothered by his mate. You may have to endure a “come-here-now-go-away” drama until he realizes you’re not trying to control him. He’ll need to take baby steps to let you in. Scorpio is the sign of deep bonding and extreme detachment, making him a bit schizophrenic about intimacy.

Closeness frightens him, because deep down, he fears separation. Abandonment issues? He’s got ‘em for days. While he longs to merge souls with you, another part of him is terrified to lose control. He feels pain at a deeper level than any other sign, and breakups can haunt him for decades. To protect himself, he’ll try to keep some sense of “space” in the relationship—having a long-distance relationship, working late, or keeping his own apartment. If you push him to take a step before he’s ready, he’ll draw back. This could go on for years until he feels “ready” (read: safe enough) to come a centimeter closer. The Scorpio man needs space, but he also needs you to lay down limits. Don’t give him an all-access pass to your life (are you listening, Sagittarius, Leo and Gemini ladies?). He needs an edge of mystery, some part of you that he’ll never figure out. Dancing this fine line can be exhausting and unrewarding for some women, and we don’t recommend it unless it comes naturally.

Once you’re in, should you make it that far, you’ll feel like a goddess. The Scorpio man is a wholly different creature once he surrenders to trust. He lets you be totally sexually expressed while feeling fully respected. There’s no Madonna/whore conflict. The more you fly your freak flag, the more he pledges allegiance. Scorpio is the sign of death and rebirth, the mythic Phoenix rising from the ashes of destruction. You may have several breakups or relationship phases en route to fully committing. Though they will be harrowing for you, he considers these fiery emotional trials a purification ritual. In his mind, the more your relationship withstands turmoil, the more “real” your connection is. Hardcore? You bet.

Although he can seem commitment-phobic, he takes marriage and relationships more seriously than mafia initiation. He cherishes trust and honesty—at least your honesty. On the other hand, you may never quite know where he stands. But that’s part of the adventure with a Scorpio. Just when you think you’ve got him figured out, he throws you a curve. Stay on your toes, and he might just sweep you off your feet.

(Read More articles on the Passionate Scorpio Man Love, Lust, Obsession and Insanity on this blog. Also, to get a free detailed compatibility reading leave your comments with birth details!)

Aishwarya Gharat said…
Yes, it is very much available. :) Please like this page:- https://www.facebook.com/ScorpioManLoveLustObsession/
November 27, 2015 at 11:24 AM

Anonymous said…
Do u have email address I can't find one and would really like some info about Pisces and Scorpio
January 21, 2017 at 11:59 PM

Aishwarya Gharat said…
Please DM me here, https://www.facebook.com/ScorpioManLoveLustObsession/ You can also subscribe to my blog, it's FREE!!
January 29, 2017 at 9:59 PM