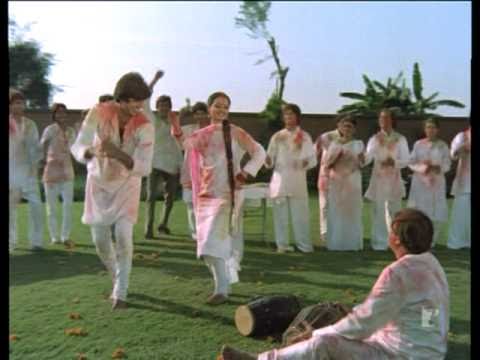 “God created your life and you are in charge to color it and make it Beautiful”. Okay, these words sound a bit western. However, Bollywood celebrates Holi with “desi beats” like “Balam Pichkari, Rang Barse, Holi ke Din and Aang se Aang” like songs. One of the favorite Holi festival song of Bollywood is “Holi Khele Raghubeera” from the movie “Baghbaan”. Amitabh Bachchan seems to bring the Bollywood’s Holi to life. In fact, among the most famous of the Holi parties Big B’s celebrations have been top rated so far by most of the film industry. Colors add life to almost everything. 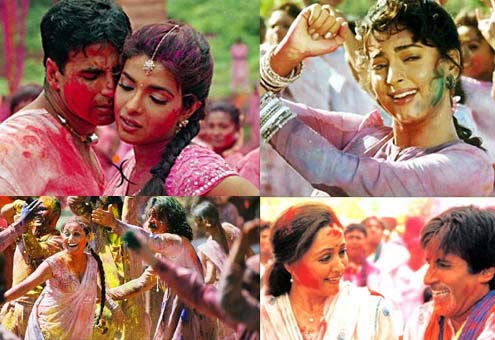 That’s the reason perhaps why  our world is so colorful.  Countries like India celebrate the colour festival to mark the beginning of the summer season.  The colour festival is commenced by applying Saffron tilak or Saffron paste on the forehead.

One of the Scientific reason’s  for this according to ancient science of  Ayurveda is  that the golden spice has been considered as a natural remedy for hyperpigmentation.  Bollywood holis are as fun as they are shown in the movies. Another family or should I say the senior most respected family of B’wood that celebrates Holi is the Kapoor family.  The showman of the 50s, 60s, 70s and the 80s Raj Kapoor celebrated Holi with this family, friends and workers at his studio every year. He celebrated holi in full vigour by drinking “bhang”. Everyone who went to Kapoor’s holi had to get wet, drink bhang and throw colours at each other. 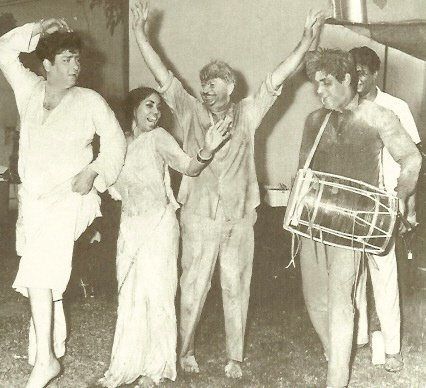 The festival of colour is celebrated throughout India with zeal and enthusiasm. Men, women and children from all ages apply different colors to each other.

Holi Parties are one of the main attraction of the festival due to  the  feast of delicious dishes.  People dance to music and greet each other with colours and exchange sweets as an important part of the festival. The Indian film industry doesn’t just celebrate holi in the studios or at any Superstar’s residence alone. On the contrary, Bollywood has upheld this tradition with it’s every green music and movies. Today, as people celebrate holi, B’wood’s hit holi songs are played by the DJs. Even when B’wood celebrities are throwing a Holi party at their residence, they sing and dance on these songs.

Who can forget King Khan when it comes to Holi? The most happening Holi party had Madhuri Dixit showing her latkas and jhatkas at SRK’s Mannat. It was the very first party at Mannat in 1995 hosted by the young SRK and his very pretty wife Gauri khan. Since, then SRK has regularly thrown Holi parties at Mannat and he has even attended other holi parties. King Khan is a family man and so you get to see his wife, sister and children celebrating this festival together. He follows typical Indian tradition of together we eat, sleep and celebrate. As a matter of fact, for all big Bollywood families it’s the same tradition. 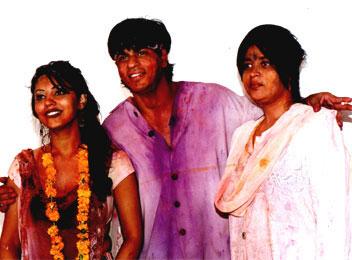 As per the Hindu mythology, the festival embarks the conquer of evil over truth . It is celebrated by lighting a pyre which symbolises the killing of  Holika, the nasty  sister of Hiranyakashipu, a devilish ruler.

The outstanding  thing about Holi are the lip smacking sweets. In addition, to  of course, the spread of colours in the palate this festival brings with it. After getting wet and colourful, it’s time for lunch at Bollywood holi parties.

The Holi palate is filled with Saffron Delicacies right from Gujiyas to Sweet rice, Puran Poli, Kesar Katli to Saffron thandai . Holi is the festival that marks the end of the winter season. It welcomes the spring. The colours are a celebration of life and getting wet is about getting drenched in love. But who could celebrate it better than the creative people? Bollywood has been bringing out the colours to life. It has also been bringing various holi traditions in the mainstream. Thus, retaining and growing India’s cultural heritage and richness.

This year too, Holi, was fabulous as usual. Farhan akhtar, Javed akhtar and Shabana azmi celebrated holi in full- swing like every year.  Various Bollywood celebrities like Alia bhatt, Sidharth Malhotra, Abhishek Bachchan, Aishwarya Rai Bachchan and cute Aaradhya celebrated holi this year.  Shahrukh khan celebrated his holi with little Abram. Seems like the next generation of Bollywood is on the way to fame.
Different colours have various mood elevating properties. Colours have the power to change a dull room into a vibrant one. Same  can be said about Bollywood.

The 90s and early 2000s witnessed the most colorful holi songs. In fact, in each movie had at least one holi song or scene. But Holi celebrations have reduced in Bollywood movies since 2005 after the release of the evergreen “Holi Khele Raghubeera” song in which Big B grooved with the vibrantly colored and wet Hema Malini. It was only in 2013 with the release of Ranbir Kapoor’s “Yeh Jawani Hai Deewani” the song “Balam Pichkari” took the new generation by storm. The sexy wet Deepika padukone and hot Ranbir kapoor looked fiery together. They perfectly brought out the spirit of Holi and young love. 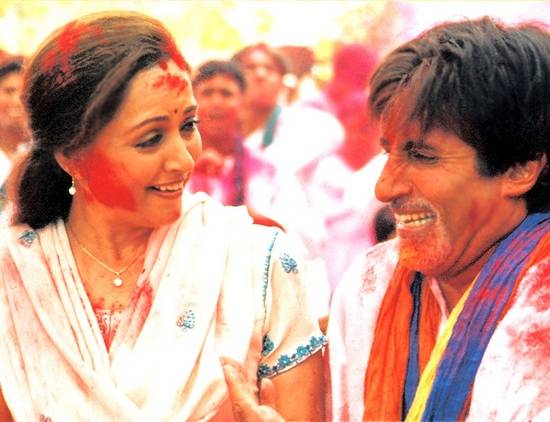 The song is a Bollywood version of a Bhojpuri holi folk song. It can be said that Bollywood doesn’t just celebrate Holi it also celebrates India. It was in RK studios where all the fun began in the early 1960s when veteran Raj Kapoor spread the colors of Holi across Bollywood. The trend was then followed by the living legend Amitabh Bachchan and Shahrukh Khan in the 1990s. 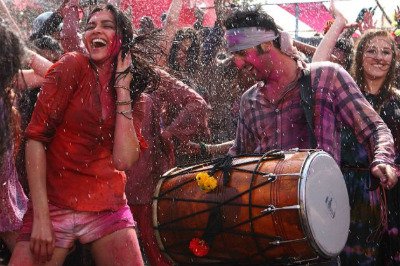 Ace director Subhash Ghai was also famous for throwing lavish Holi parties in the 1990s. Today, it seems that the rising Bollywood stars and directors have decided to take the celebration to new heights. Younger stars have brought in their “remix” culture to the festival. There is new life and new enthusiasm.  After all, there is a big similarity between Bollywood and Holi, both are colorful, creative and wet with love!