"Fair in complexion, facial shape of a cut diamond and look of royalty. But Gopikabai Peshwa, did not treat him like one. Her purpose of getting pregnant and increasing the number of children was more, it seemed, to increase her clout."


Madhavrao was little pale, having sort of fragile constitution. He was princely looking though but not as robust as his elder brother Vishwasrao Peshwa when was of his age. He was also a quiet child and obedient with curious honey dew eyes and having his nose inherited in right proportion from his mother and father. Undoubtedly, he had the Bhatt-Deshmukh stamp on his face.

Fair in complexion, facial shape of a cut diamond and look of royalty. But Gopikabai, did not treat him like one. Her purpose of getting pregnant and increasing the number of children was more, it seemed, to increase her clout.

Maybe in her mind, she thought having many children and controlling them like a military leader would help her build her personal army. Perhaps, this army would become highly influential politically and may be at times do a coup against her disobedient husband Nanasaheb.

Perhaps, nobody would call or imagine Nanasaheb to be either philandering or disobedient. He spent most of his time fighting and winning conquests for Hindavi Swarajya to unite India. The only reason why he indulged in generous but harmless entertainment was due to his ever interfering and bickering  wife.

Whenever her husband came home from a long tiresome battle, she would start relentless bickering about everything he did. It didn't matter to her that her husband never lost a war. It mattered to her if her two rather meddling brothers, got their fair share of the treasure or not.

Gopikabai was from the family of Sahukars, her father was a loyal sardar of the Peshwas. Need of money for a conquest or mohim, had allowed her to become the Peshwa daughter-in-law, in 1732. At that time, she was a little girl of around 8 years of age. However, it had been a rather disastrous deal as she had taken away the peace from the day of her entry.

She was not even good looking except for her fair complexion, unlike her extremely beautiful and young looking mother-in-law Kashibai or the divine goddess like Rakmabai, first wife of Chimaji Appasaheb.

Still, in the present times she was the most influential woman, second only to the main queen of  Chhatrapati Shahu I Raje.

She used her influence well. If, Politics was under her husband's control, then home was under her. Young Vishwasrao was not particularly fond of his mother because of her constant bickering, manipulations and control freak nature.

But Gopikabai knew how to control him. It was her idea to push her most favorite son under the wings of his second paternal uncle Sadashivrao.

She knew Bhausaheb was a lonely soul and like his father was loving and caring. He thought of the family first without being biased about his own and others. Just like Chimaji Appasaheb, Bhausaheb was comfortable in the character of Laxman to Nanasaheb's Ram.

All types of biases were applicable to Raghoba who very well knew that he had nothing to do with the family. Somehow, he was conceived when the circumstances were turbulent in the Peshwa household. It made him prenatally, an insensitive person who was greedy, jealous and more like Mughal than a Peshwa. He hated his own people with bitter venom and spite. Perhaps, shadow of greed, power-obsession, deceit, conniving and absolute manipulation had fallen on him prenatally itself.

Being aware, that her son understood at a very young age this attitude of Raghoba, Gopikabai encouraged his love for bhausaheb.

If Raghoba was a threat for her dream of making Vishwasrao the next Peshwa, then Bhausaheb was the guardian of that dream.

Gopikabai allowed generously, which was not her nature at all, Vishwasrao to eat, sleep and learn with Bhausaheb. She knew, that her son was in the best company he could ever get and for this, only reason she could win his heart.

As, there was no one in the entire family that the young Vishwasrao loved more than Sadashivrao.

There is news that Radhikabai didn't exist,Smartyoungsters.com doesn't take responsibility of the Book chapters.
From the Author: References 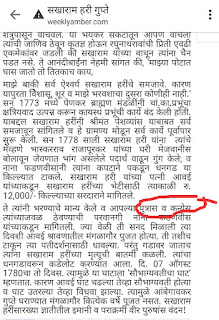 This article has not been written by me, it states some documented facts about Sardar Sakharam Hari Gupte's execution by Nana Fadnavis. It mentions that Sardar Gupte's wife Avaibai, had come to see him at Dhangad fort along with his son and "daughter". He was executed in 1770s it's not possible for a daughter to remain unmarried, she must be in her 20s. So, either she was a widow or preferred to stay chaste. I don't know why anyone would mention the daughter of she never existed in the first place. This document is about his execution at Dhangad fort.
Therefore, whether the love story is true or not. There seems to be some evidence of her existence. There is also evidence that Nana Fadnavis and Gopikabai didn't get along with Sardar Sakharam Hari Gupte. The reason given is Raghoba, however, nobody executed him further Gopikabai forgave him.
The intention is not to malign anyone but Radhikabai's story is not my creation. Many people before me had written about it and national tv had even aired it during my childhood. So, even if it's fiction, it's true that the story existed and also that during Narayanrao Peshwa's reign tables turned against Sardar Gupte, who was the general of the successful Attock campaign.
Also, Nanasaheb Peshwa had 6 sons and not 3, 3 of them died. Sometimes, some tales tell you some uncomfortable facts, may be they originate for that purpose. If she was a creation then they created her even at the Dhangard fort incident. Perhaps, creative people always existed and only a beautiful pious woman inspires creativity.
Take in good light, woman is god's noblest creation!

Other references:
https://shodhganga.inflibnet.ac.in/bitstream/10603/140659/8/08_chapter%202.pdf
Read other chapters from Mee Radhika: The Lost Love of Shrimant Vishwasrao Peshwe

Lavanya said…
Gopikabai doesn't deserve the amount of greatness which historians have given her. Waiting for the book to be out.
November 10, 2019 at 3:30 PM

Aishwarya Gharat said…
Like I said, History is written by those who survive. Nana Fadnavis, for all his greatness, was a blind follower of Gopikabai. He destroyed Radhikabai's family. He gave a very humiliating death to her father Sardar Gupte, it was him who had crossed Attock for Raghunathrao. But the master got the credit. You can get information on that. However, nobody speak sabout it loud and clear.
November 18, 2019 at 11:41 AM